As reported by BBC news, those uncannily up2date Norwegians have been trying out TV on their phones, using a Streaming download service from network NRK. I presume as the users don’t have to have a player that its running from a Java applet, though the Nokia phone pictured does have RealPlayer installed by default.

So far the reported take up has been 2000 streams, which seems about right as although the countries new technology take up is high from what I gather from the last Norwegian dinner party I was invited to, its not always technology for technology sake that interests but purely gaining a better life for those involved. To what way TV on a mobile phone can improve life beyond relieving boredom on commutes or allowing the main users of phones, pre teens, to watch some pointlessly boring reality TV show remains to be seen.

Of course this isn’t stopping the BBC in offering its archive (cleverly already paid for by the Great British Public television licensing scheme and sales abroad) to mobile operators in the UK, which as reported by same news article could mean that the commute to work could be whiled away with a hotelier from Torquay battering a sapling against an austin 1300 instead of watching the next wave of incoming commuters on increasingly packed cattle trucks.

Though as a side note, if my other theory is correct we will just be sharing said cattle truck with increasingly gormless teens watching whatever rubbish our TV programmers have declared to be the next money making fad, perhaps even with phone integration to take a step towards 20 years of promised interactivity with our google-sets. 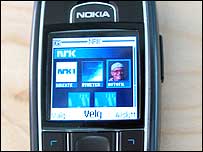