Well the posts have been slowing down again, probably because I started at Vizrt this Monday, all going well so far. Will probably post more stuff regarding that when I am more settled.

Anyways, before I moved to Bergen I was looking through my cupboards getting rid if excess so that I didn’t have to take unwanted items when I found that I basically had enough bits of computer to build a complete new one. I managed to cobble together a Athlon 1.4 Thunderbird, an Abit Motherboard (with Raid and all sorts of unwanted features), an Nvidia Quadro 2 graphics card, 512Mb of Ram, 80Gb of harddrive, a case, a Hauppage card (from my long gone MythTV box) and most interestingly a Terratec 24/96Khz card that I used to use to make music.

So what possible use could I put this too, well not having a spare Windows license, and a liking to Linux I wanted to see what applications Linux had for making music.

I came across documentation on the excellent Linuxsampler project.

This project, is very much like Tascams gigasampler in that it can stream multiple gigabyte samples from harddisk for music. Linuxsampler supported the gigasampler format which I happened to have a couple of demos for including a 4x1Gb piano files. Having read in the past quite alot about making music on Linux I was faced with too choices:

Now I must admit that I didn’t want to spend months on the project so I choose DeMudi, a project from agnula. It was a distro with the low latency kernel plus it was based on my favoured Debian. Best of both worlds?

Well almost. In fact the installation was easier than Debian, and it took me right to a GUI and it all looked very sweet. On logging in to a gnome desktop there was a read me that helped to get a really nice drum machine (hydrogen) working with Jack. It supported my soundcard very well and the latency is better than my fast lean Windows PC.

So on to linuxsampler. A look at the packages installed showed it was there but the frontend wasn’t and this is when the trouble started. I have no idea why they didn’t have a version of QSampler installed from the off, but Agnula if you reading this put it in the next version. So downloaded the source for QSampler, but DeMudi doesn’t come with any tools to compile let alone the libraries required.

The standard package source doesn’t have them so I ended up pointing it to debian’s and tried getting everything that I needed. I must have wasted hours trying to get the correct libraries and so forth, and then while I was waiting for yet another library to come down, I happened to find a binary already built for debian on the web ( a quick google should show where).

This installed very quickly, started no problem and started Linux Sampler with no problem. Once that was running I used Jack to setup the audio and then setup a Midi interface connecting everything together with a MOTU midi interface running on my PC. After loading the Gigasample in, I had a nearly prefect piano.

In fact the only thing wrong with it was that I hadn’t looked at it properly and in fact each 1Gb file was a velocity layer making the whole thing a 4Gb file! Once loaded I had a play and it sounded fantastic, except when I went completely mad and used up a lot of polyphony, the Linux box worked perfectly with really low latency. 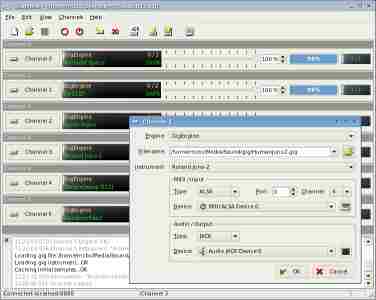 All I think DeMudi should have is the development tools installed plus QSampler and then it would be complete, but for now I have a fantastic piano sound.